One cloudy Friday in August, Kelvin*, a first-year student, had barely begun his journey home after an 8 a.m. class at the Faculty of Social Science when it began to rain. Knowing full well that his current health condition would only get worse if he continues his journey, he decided to take cover at the Students’ Union Building. But nothing in his almost seven months of studentship at the institution prepared him for what awaited him.

The numb feeling of cold water on his feet was the first sign that all was not well. He looked down, only to realize that the place he stood was filled with water. “How did water get here,” the baffled student asked rhetorically. But he found his answer when he looked and saw water dripping from the ceiling. He stood there staring, only to be brought back when a drop of water from the spirogyra-filled roofing kissed his dark cheeks. 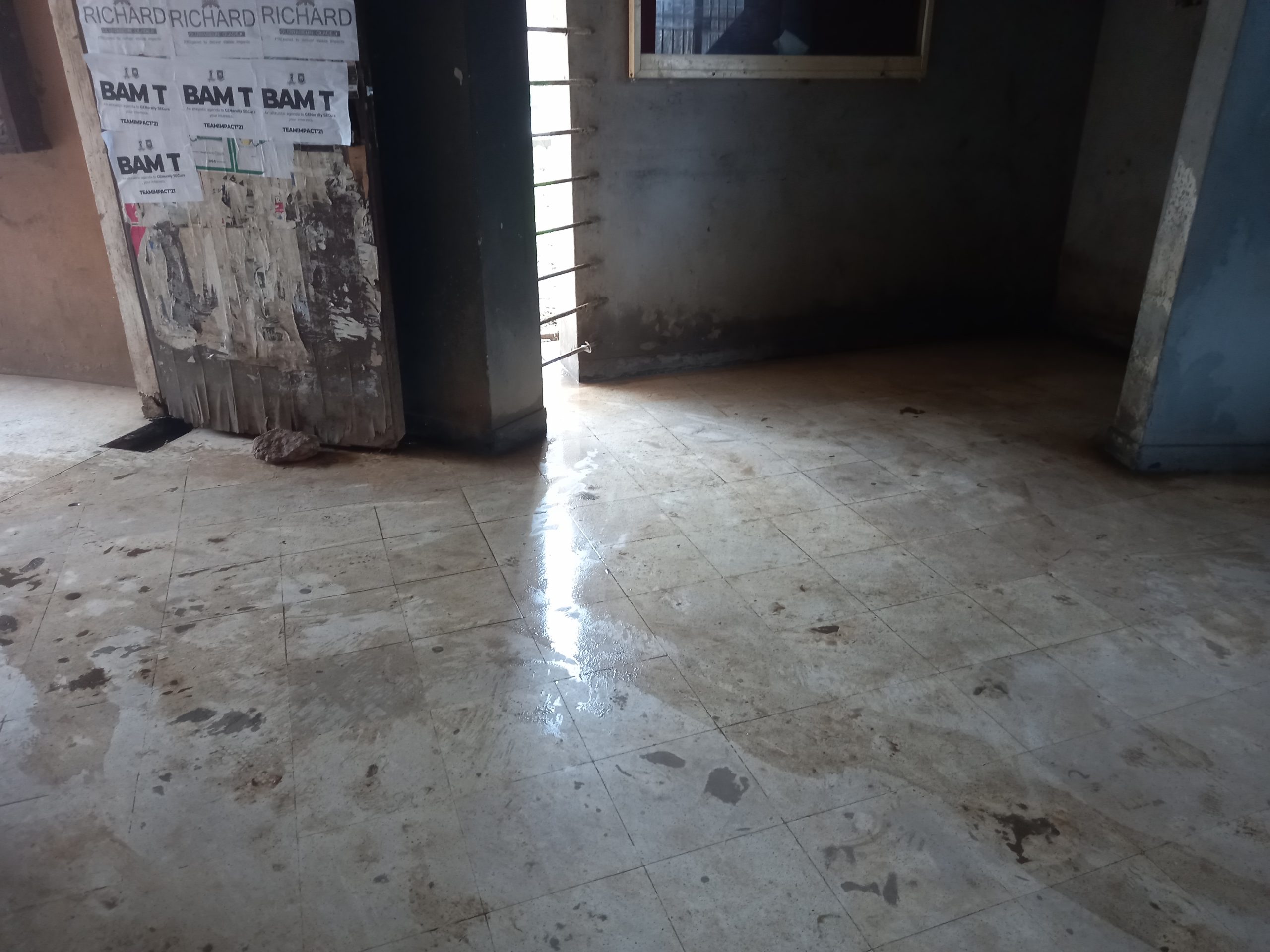 At that moment, he knew he had to continue his journey. He headed for an exit through the back of the building, but was stopped in his tracks when he saw an even larger pool of water at the corridor beside the canteen. The water dripping from the deep green top of the building here appeared to be more serious.

At that moment, he asked, “who is in charge of the maintenance of this building?” But like every other question he had about the building, there was no one who could provide him an answer.

The Students’ Union building, also known as the Kunle Adepeju Memorial Building, is where the management and general superintendence of the business of the union is carried out.  Among other duties, the Office of the House Secretary is “responsible for the maintenance of the Union Building and other properties of the Union,” a statement on the school’s website indicates. However, the current occupant of the office, Richard Oladeji, seems to be at ease while the building falls apart.

Aside from the endless pools of water logged in various parts of the building, it wears an image that wonders if it has a guardian.

The Students’ Union Building without a Restroom

While the performance of the current Students’ Union administration remains a subject that would continue to be treated, the absence of a restroom in the building that houses an association meant to, among other things, provide succor to students is a question that the administration, through Richard’s office, has failed to answer.

Expectedly, since adaptation is a characteristic of every human that remains irreplaceable, students of the institution and other visitors to the building had no choice but to find themselves a spot within the building where they can answer the call of nature.

This spot directly opposite the office of some of the executive members of the union is now home to maggots, among other dirt, that seem to have reached their final destination, at the expense of students’ health.

The Manifesto Yet To Manifest

Aside from the fact that the House the current House Secretary was elected to maintain seems to be of no interest to him, various promises he made to Uites during his manifesto seem to have gone six feet below the SU Building the night he got elected into office.

Even though his two-page manifesto appears to have been deliberately designed to be less wordy, Richard has done a good job of ensuring the scorecard in the various categories of promises he made has lesser impacts.

A first-time visitor to UI might think the long queue at the school park where students stand in an endless line occurs once in a blue moon, as such stress is not befitting of students of Nigeria’s number-one institution, especially since these students have a union vested with the responsibility of ensuring the learning environment is conducive. However, a second visit would be enough to convince him that the queue is a daily ritual for UItes.

If the first promise the House Secretary made on this subject matter – that he would “appeal to the management for more tricycles on campus” – had been effectively fulfilled, it would have been a different story.

Perhaps due to the timing, the loudest part of Richard’s security agenda was his promise to “appeal to the school management to have a standby post in all female halls of residence.”

“We don’t have a security post, we only have a porters’ lodge,” Blessing*, a law student who resides at Awo Hall, said one Saturday night in August.

At Idia, the story is similar. Jummai, a final-year student who resides in the Hall, said that the Hall does not have a permanent security post. “The security (officials) who patrol here at night squat in one of the offices used by the porters,” she said.

She added that even though there is no problem in the Hall, security-wise, “everyone needs security, so we need it.”

While the story that no permanent security post is present at Awo and Idia is similar, at Queen’s Hall, Fisayo, a resident of the Hall, insists that they do not need it. “I don’t think we actually need it because Abefele is beside us,” she maintained.

Overall, from the interview with occupants of the various female halls, it is evident that the House Secretary’s security agenda is secure only on paper.

When confronted over the failure of his office to act as water begins to take over the Students’ Union Building, Richard claimed that his office wrote to the management on the state of the building last year, but they have not gotten a response.

“Since last year, we have written to the Physical Planning Unit to come and fix it, they inspected it but we are still waiting to hear from them,” the House Secretary told this reporter in a telephone interview.

Speaking on the many promises he made to UItes that are yet to be fulfilled, he argued that the only one he thinks haven’t been fulfilled is the installation of street lights from Awo Hall to Idia Hall.

Again, he argued that this is because his office wrote to the management last year but they were told the school isn’t buoyant enough to fund it.

When confronted about other promises he made that are yet to be effectively fulfilled, he argued, contrary to findings, that he has largely fulfilled them.

*Some names have been changed to protect identities