An aspirant for the students’ union seat of the University of Ibadan, Richard Oladeji, claims he recorded 20 landmark achievements while he was the House Secretary of the union for nearly two years between 2019 and 2021.
Richard, who recently resigned his position in line with the constitution guiding electoral positions in the union, made the claim in a list of his achievements distributed to students, sighted by this reporter last week.

The achievements listed by the Presidential aspirant, who is a third year student of Sociology, are largely not for HIS OFFICE. They were presented to MISLEAD the student populace.

As the Students’ Union election begins to draw closer, the political atmosphere has taken an intense turn. Incumbent office holders, whose names were last heard when they campaigned for their current office two years ago, have begun to resurface. New faces, who have no track record but a word document filled with rhyming words, have also shown interest to become one of the next occupants of the Kunle Adepeju memorial building.
From Abraham Lincoln’s inauguration day speech to Thomas Roosevelt’s autobiography and Martin Luther King’s I Have A Dream, quotes from these and many others have taken over students’ whatsapp feeds even though majority of these student politicians can’t lay claim to what it takes to be a voice of the people like Luther King was, or a leader who listens to the voice of the masses always, like Lincoln did; to them, it’s not that deep.
***
On Thursday, September 23, Richard, in a well ironed native attire, flanked by two other students, walked into the Large Lecture theatre of the Faculty of The Social Sciences. First year students of the Faculty were receiving a lecture when he walked in so he had to wait till the lecture was over.
Few minutes later, he returned to seek for students’ support and at one of the two entrances to the hall stood his supporters, who distributed with much enthusiasm a leaflet containing a list of 20 achievements Richard recorded while he was House Secretary for nearly two years.
The said achievements are as seen below: 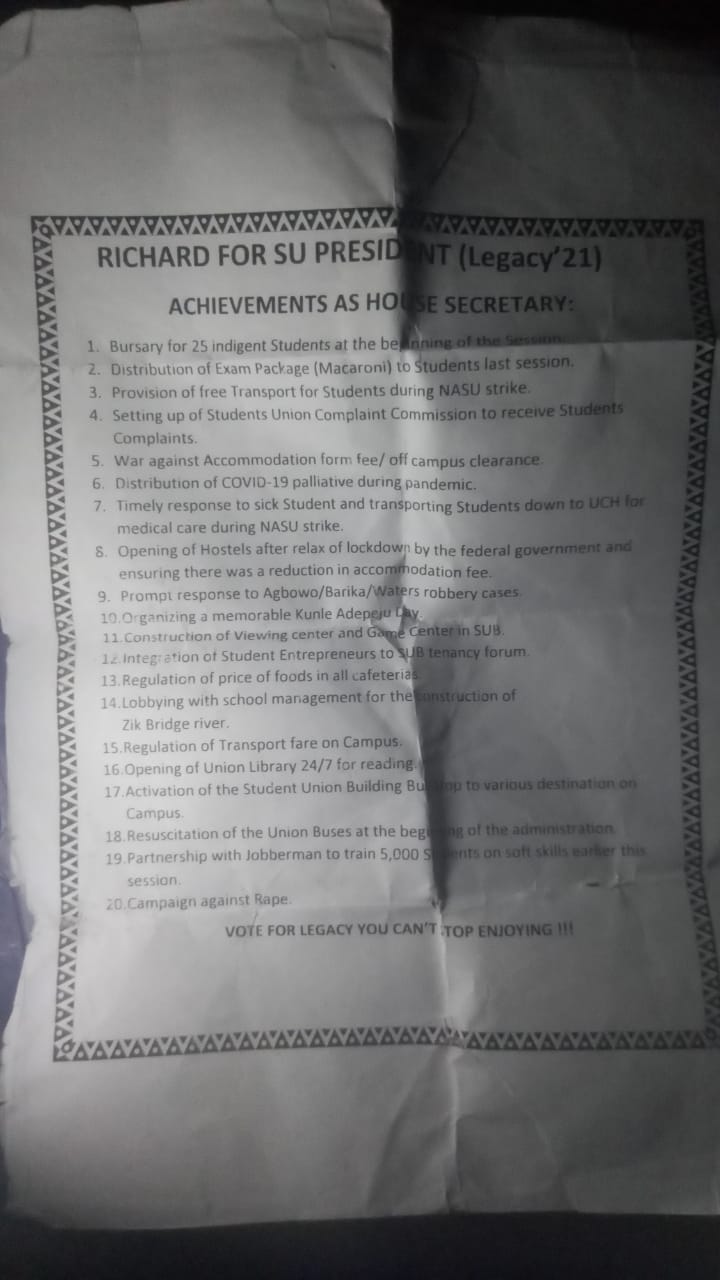 Did Richard Truly Record These Achievements As House Secretary?

A deep dive into these achievements has shown that the claim that they were that of his office as House Secretary is far from the truth.
For example, the first achievement he listed was that through his office, 25 indigent students were awarded a Bursary at the beginning of the Semester. While it is true that the current Students’ Union administration did this, findings have shown that it is technically faulty for him to have listed it as an achievement of his office because such a program does not fall under the scope of his roles as highlighted by the document establishing the union.
At the same time, the bursary program was an initiative of the entire Akeju-led administration.
By the same token, the claim that his office inaugurated a Students’ Union Complaints Commission to receive students complaints is misleading. Findings by the reporter showed that the commission was inaugurated by the Union’s President. In fact, it could not be established that he had the constitutional power to do so.
In the fifth achievement on the list, he claimed that he waged a ‘war’ against accommodation form fee/off campus clearance. Again, this claim is misleading because the campaign that led to the removal of the fee was carried out by the entire union executives. In fact, his office couldn’t have made such a move solely.
He also claimed that the “opening of Hostels after relax(sic) of lockdown by the federal government and ensuring there was a reduction in accommodation fee.” The first claim here is outrightly false because neither his office nor that of the union’s President opened the hostels; the management did. The reduction in accommodation fee was also not ‘ensured’ by his office, but by the entire union following an outcry by students.
Another questionable claim Richard made was that his office as House Secretary held a Campaign against Rape. While a campaign was truly held against rape by the students’ union in June last year, the claim that it was a program initiated by his office is questionable. In fact, none of the official statements released by the union throughout the campaign that lasted for 26 days had his signature.
‘A Clause Was Missing…’ — Richard Confirms His Self Acclaimed Achievements Were Misleading
When contacted for clarifications on the list of achievements he claimed to have recorded as the House Secretary, Richard confirmed that the flier omitted clauses that would have shown the achievements were not his only.
“In the list of my achievements, a clause was missing there which would have helped any reader. The clause missing is that as the House Secretary and with the help of the integration team, we were able to achieve the following,” Richard said.
He explained further that he was trying not to take the glory of the entire team adding that, “what I am saying is that as a member of the team, these are the achievements that involved my office as a member of the team.”

While the achievements released by the former House Secretary were recorded by the current administration, they were deliberately written to appear as achievements of his office alone, an action that is clearly MISLEADING.