The Students’ Representatives Council of the University of Ibadan Students’ Union has suspended activities on the UI SU Whatsapp TV pending the conclusion of an investigation.

This development was announced by the Speaker of the House, Eniola Olatoye, in an interview with UCJUI, at the end of the sitting of the SRC on Saturday.

“We mentioned this in our sitting today during the AOB session, and our Honourable members highlighted aspects of the constitution that seem to have been flouted. For those reasons, his case has been forwarded to the disciplinary committee for proper investigation” the Speaker said.

She also added that a proper public notice of the resolution would be made available to the UI populace latest by Sunday, 13th of November.

UCJUI Investigation and Evidence Against PRO

Recall that on Saturday, an investigative report co-published by Indy Press and its mother Union, UCJUI, detailed how the Public Relations Officer of the Students’ Union, Olalekan Micheal, flouted several provisions of the union’s constitution, particularly in his handling of the UI SU TV.

According to this section of the constitution, the only official eligible to receive funds and payments on behalf of the Students’ Union is the Treasurer, through the official account of the Union. “The Treasurer shall receive, and account for, all the Union’s monies derived from all sources” and “shall deposit all monies so received in the Union’s bank account on the next working day after such receipt,” the constitution states.

However, UCJUI discovered that the PRO, in a clear violation of this law, received payment for adverts on the SU TV into his personal bank account. 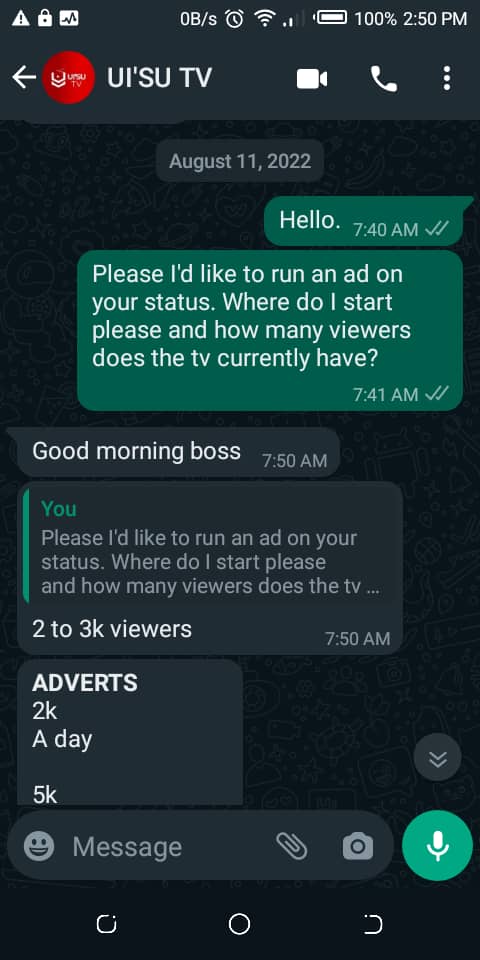 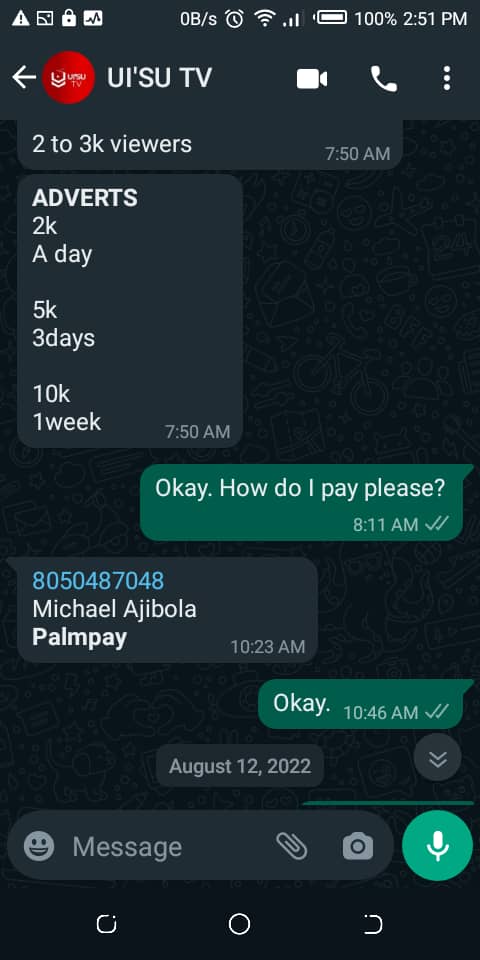 [The handler of the TV sent the personal account details of the PRO, Michael Ajibola, to the student] 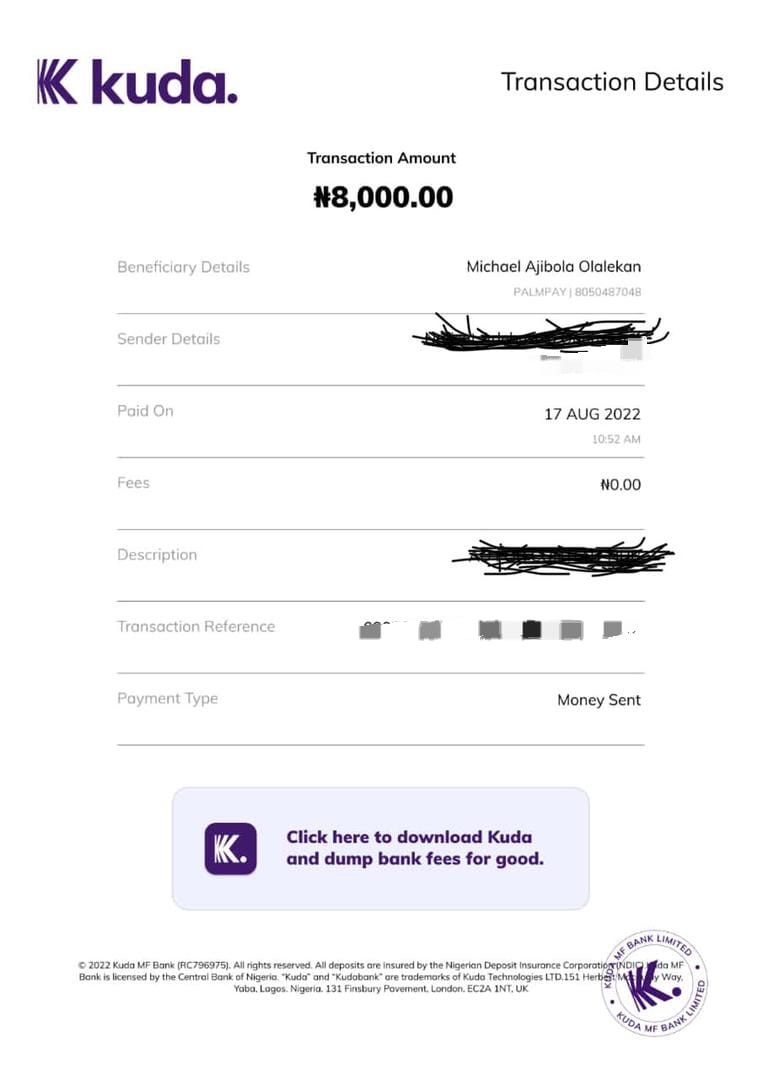 {Receipt of payment made by the student to the personal account of the PRO, which contradicts the dictates of the constitution. The name and description are blurred to protect the identity of the student involved.]

According to this section of the constitution, to receive payment for any activity, the Treasurer “shall jointly, with the General Secretary and the President or in his/her absence the acting President, sign cheques for withdrawal of monies within the limit prescribed by the approved budget and shall be responsible to the Executive and Council for the disbursement of the approved expenditure of the Union.”

However, contrary to the dictates of the constitution, the PRO explained in an interview that he allocates the funds received to manage the TV himself because the Union lacks the required knowledge to run the TV and does not finance it.

“Does the Union understand what it takes to run a TV? Does the Union finance the TV? Did I ask for anybody’s validation to start the TV?” he was quoted saying.

This section of the constitution mandates that “every official of the Union shall take due care and give a proper account of any Union properties entrusted to his/her care and hand over the same to his/her successor by means of a well-prepared document designed for the purpose.”

However, contrary to this constitution section, the PRO used his personal mobile number to create the SU TV.

“The number for UI SU TV is my second line. Most of my friends still have the number saved as mine,” OMA said.

When questioned about what would happen to the TV, a property of the SU, when he leaves office, he explained that his successor would continue the TV with a new phone number.

SU President, VP Speaks With UCJUI on Allegations Against Oma

The President of the Students’ Union, Adewole Yinka, confirmed some of the findings in the investigative report. He told UCJUI that the PRO does not get approval for allocating money made from the running of the TV.

The President noted that he had in the past confronted him regarding this. “I’ll message him, and he’ll tell me the TV is his own. And he said he’ll be remitting N5,000 every month to the Union. He will ask if I know how much data he is spending.

“I said how much data are you buying? I remember that during the last approval of the House, his office took the highest amount, which is 20k every month. What have you been using it for? I personally said I wouldn’t be taking any penny,” the President explained on Saturday night.

Contrary to the claim by the PRO that the TV was his initiative, the SU President said he was the one who asked Oma to create a WhatsApp TV for the Union. He explained that when the TV was created, he called for the use of a new mobile number to ensure that there would be a difference between the TV, which belongs to the Union, and the PRO, who only occupies the office for the time being.

“I said that the Union should have a dedicated line so that if there’s an emergency, you can call the line. I also felt like that number should be used for WhatsApp TV.

“The UI SU TV is the Union’s property, and I clearly stated that the fact that we have it named UI SU TV clearly shows that the Union owns it.”

Speaking further, the President noted that it was wrong for the PRO to attempt to parade the TV as his because it was his (Mascot’s) idea for the Union and not that of the PRO, adding that the decision for the Union to have a WhatsApp was reached in an Executive Council meeting held about a year ago.

In order to get the minutes of the said meeting, UCJ UI reached out to the General Secretary of the Union, Bamidele Taiwo (Bam T) via multiple phone calls but it rang out each time with no answer. The Treasurer, Daniel Olamide, was also contacted but she hung up on our reporter after a few seconds of introduction.

When asked to give a comment, the Vice President of the Union, Zainab Oluotanmi, noted that even though she can’t remember the details of the day the TV was introduced, she was sure all Executive members agreed that it should be created for the Union.

“I can’t remember the details, but we all agree that we will have a TV. The Students’ Union owns it as a means of disseminating information to students,” she said.

SU President Distances Self From Oma’s Rejoinder to Investigative Report

Speaking on a widely shared broadcast message, signed by ‘the Publicity Team’, in reaction to the investigation published by UCJUI, the President explained that it did not come from the Students Union Executive Council, because he did not sign any statement on the issue and was not briefed about any statement released by any of his Executive members.

“The response to the story is not from the UNION; it is from him (OMA). Personally, I don’t have any release concerning that story,” he noted.

Meanwhile, the Speaker explained that it is important to note that the constitution of the Union still stands.

Recall that in his defense, the PRO had argued that the constitution was archaic and did not cover innovations.

However, the Speaker explained this is not an excuse to break the law.

“If there’s one thing we all can agree on, at least all of us in the House, is that our constitution definitely needs a review. But the constitution still stands, unfortunately, until the review is passed. I have sent two letters to the constitution review committee chairman, and I think his committee is about to even commence work on it.

“He was even at the sitting today and made reference to that. But one thing is that as long as the provisions look archaic and do not take into account the things that have changed, it still stands,” she added.

OMA Creates Another Channel of Communication

Hours after the SRC suspended the activities of the UISU WhatsApp Tv, OMA has created other WhatsApp channels for UI students. On the morning of Sunday, 13th November 2022, a WhatsApp broadcast with links to ten different groups tagged, “UITES WHATSAPP COMMUNITY” was circulated, with OMA’s and the UISU TV’s lines as administrators.