When Oluwaseun Adeyemo, a second-year student of the department of Microbiology, lost her life in a hit-and-run accident in front of the school gate, people were quick to point out several possible reasons why she was a victim. Two reasons were commonly mentioned: drunk driving, and traffic congestion.

Considering the nature of Ibadan itself, and the caliber of the University of Ibadan, it is not strange that large human clusters – spread unevenly – share the road with fast-paced automobiles. It is also common knowledge that humans (and even the environment) are more predisposed to risks as a result of congestion and increased movement of vehicles.

To prevent unfortunate incidents such as that of Miss Adeyemo, voluntary organizations, the school authority, government traffic agencies, and the Students’ Union have made several attempts to limit vehicular speed and accidents where it is most probable; in front of the School gate.

Case in point; the Junior Chambers International (JCI) erected a caution sign in front of the School gate, somewhere near the Polaris Bank Building. There is also the speed limit sign at the road intersection between the school gate and the streets of Agbowo.

At the peak of these interventions, the Students’ Union, the Oyo state government, and an (undisclosed) private body partnered to erect speed breakers at the front of the school gate. The speed breakers – which were officially completed on the 12th of March 2022  – curbed traffic excesses quite remarkably, right until they were damaged.

Although the exact date and time of the damages cannot be ascertained, these speed breakers have remained damaged for months. Naturally, it is expected that this would significantly impact the movement of vehicles and the safety of students that use the road. To ascertain this, IndyPress UI took to the streets of the University and to Agbowo to see what the students – who predominantly cross the road – and the drivers think about the speed breakers, and their removal.

This correspondent spoke to some UI students about the speed breakers and their experience crossing the road. The general opinion is that the speed breakers reduced road crossing anxiety for many students, and made them feel safe – even if it was just a bit – while walking the sides.

James, a student of Library and Archival information Science, expressed his anger at the lack of regard for a heavy pedestrian presence by most Micra drivers. According to James, there is a certain awkwardness when he has to run to cross the road, especially on days when he is carrying heavy baggage from Agbowo.

“Recently, I tried to cross the road with my laptop in My bag; there was no traffic warden in sight, and as usual, vehicle drivers (especially those rude Micra owners) were not going to stop. I had to take flight across the road, and my bag’s Zippers opened while in transit. Naturally, I’d feel awkward, but that day was somehow for me. At least with the speed breakers, I had seconds to adjust and drivers do not have a choice but to stop”.

Sola, who is a student in the Faculty of Technology feels indifferent about the speed breakers but thinks that people have fewer reasons to be afraid when they are in place.

“I think crossing the road is something students have to get used to, speed breakers or not. I mean, some of us live in far more congested areas. Although I have had a lady who I didn’t know, nervously hold my hand, while trying to cross the road in the heat of vehicle movement. Maybe the speed breakers would be handy for people like her”  He explained.

Tolu has a different opinion about the Micra drivers. However, she explains how anxious she is crossing the road, even with her friends. According to her

“Crossing is particularly tedious for me, please. I am only confident of that road when Traffic wardens are there. Of course, the speed breakers helped the situation. When I noticed it was damaged, my fear of the road spiked. Sometimes, I and my Friends laugh at ourselves when we cross awkwardly, but the truth is, we are all very anxious. As for Micra drivers, some of them are really nice; they allow you to cross, especially when they notice that you are afraid”.

Jola, a recent graduate from the University, also described the process of crossing as one that gets her “very anxious”.  “I was particularly impressed with the speed breakers, and I really hope that the School does something about the damage. At least for people like me” She pleaded. 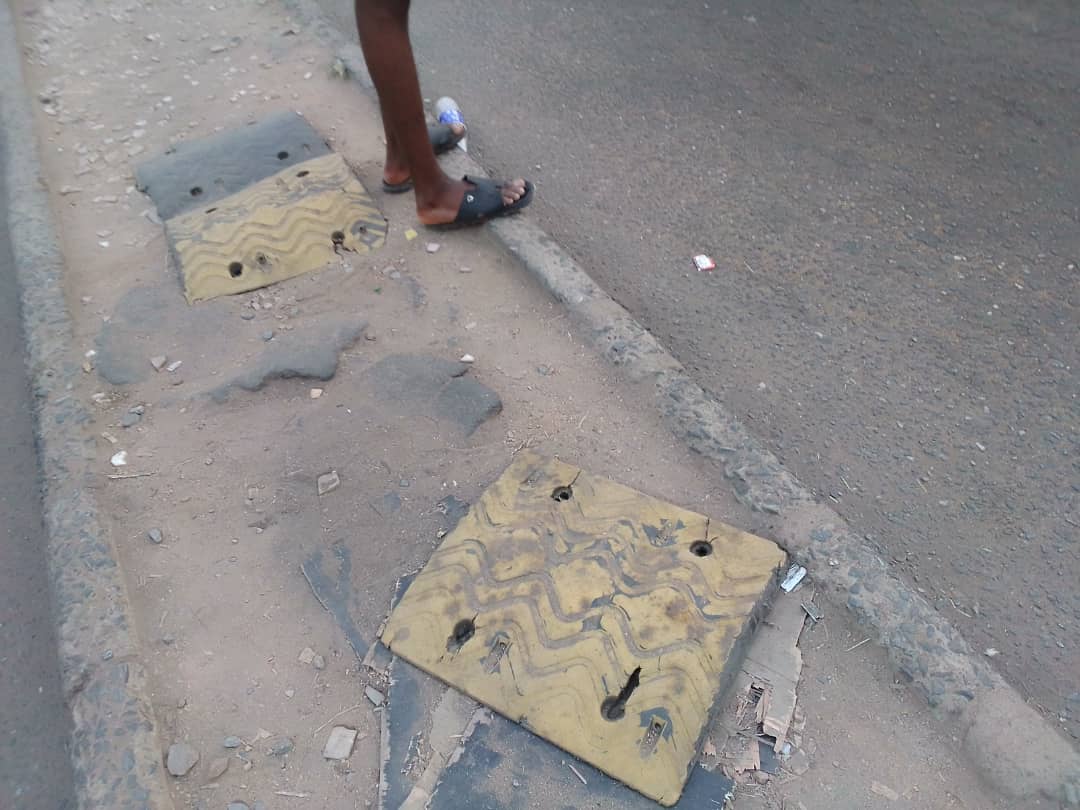 “The Speedbumps Helped us too” – Micra Drivers

Some of the cab drivers at the front of the School gate also weighed in on the matter. According to the two drivers that agreed to speak to this correspondent, the speed breakers also benefited the drivers. They claimed that it reduced confusion a bit, and kept some of them from making mistakes.

One of the drivers, Mr. Azeez, explained that drivers are consistently on the lookout because they did not want to be in debt for someone’s life.

Another of the drivers who prefer to be called “Broda Okiki” thinks that the speed breaker does the work of traffic wardens for them sometimes.

“The traffic people are also people’s fathers and mothers, and they have to rest or go home. These bumps now, help prevent vehicles coming from Samonda, Bodija and the ones coming from Ojoo avoid crashing. These vehicles always know to slow down when they approach the bump. Sometimes, when climbing the bump, the vehicles coming from Bodija and co can cross the road to the other lane or into the school. These speed brakes also help and it will help everyone if the school can put another one in”, he explained.

What does the Union think?

In an attempt to find out the ways forward, Indy Press UI reached out to the president of the Student Union, Mr. Mascot Adeyinka. According to the president, the Union and the management had already started making plans for a replacement of the speed breakers.

Speaking to this correspondent on Wednesday, 3rd of January 2023, he said :

“We’re working on another plan to meet the person that erected it before. The management is also doing well in order to replace it”

While the Students’ Union makes plans for a reconstruction of the speed breakers, it is important that some factors are put into consideration for permanent measures. First, it is necessary that the foremen work on preventing the recurrence of the damage. To effect this, the Union may want to recommend concrete speed breakers to the foremen for the sake of durability.

Also, the Union may want to consider other traffic control measures to keep things in check, alongside the speed breakers. For instance, the sidewalks and the intersection could use bigger and bolder caution signs with more obvious and traffic-sensitive colors. While it is practically impossible to control how everyone acts on the road, we could at least try as much as possible to put lasting preventive and cautionary structures in place.