On this week’s edition of Katanga Spotlight, Theophilus Femi Alawonde met with Afolabi Oluwajuwonlo, a first-class graduate of communications education from the Department of Arts and Social Sciences Education and an erstwhile Administrator-General of Independence Hall, who spoke on his formative years, being a stellar student at the University of Ibadan, co-curricular activities, and his plans for the future. Enjoy!

Theophilus: Good evening, Mr. Afolabi Oluwajuwonlo. The name is known, but the man behind the name seems to tilt toward a private life. Could you introduce yourself?

Oluwajuwonlo: I am Afolabi Oluwajuwonlo, a recent graduate from the premier university, the University of Ibadan. Yes, I’m a bit reserved but fun to be with. Education and development are my passions.

Theophilus: There’s more to the man, but we will get there. How was growing up like?

Oluwajuwonlo: I grew up in Ibadan. I’d always wanted to school at the University of Nigeria, Nsukka; courtesy of Purple Hibiscus by Chimamanda, and at least, to study outside Ibadan for the first time. Eventually, I had to attend the most prestigious university. I grew up in a family of three boys. The experience was that of freedom, confidence, and determination to succeed against all odds. Not a so rosy one, but the right foundation for a young boy who aimed to be at the top.

Oluwajuwonlo: During my holidays at our hometown in Osun, I was just a young boy who liked to talk. So, relatives would then identify me as a broadcaster, or put it as a journalist. I’m also fond of the memory of having to pick up newspapers while returning from school or errands to practice reading and writing as young boy in primary school. The experience of having to succeed at one attempt has always been with me on every endeavour. These things contributed to who I am today.

Theophilus: What changed the decision from UNN to UI? And, had it always been education and CLA for you?

Oluwajuwonlo: My friend, Bolaji, influenced my choice of picking UI. The distance to UNN was a factor too. I’m passionate about media, but I’ve always loved development and development-related issues. The passion for making a change for humanity made me apply for Law. Of course, the interest then was to be a human rights advocate. I applied to CLA and Education when I didn’t make the cut-off mark for Law. Not making it fuelled my interest in making a good grade as a first-year student so I’d be able to cross to Law by the second year. I had a 6.4 overall in 100 level, but wasn’t allowed to change to Law; as it was put, “Not allowed to go in the best interest of the department.” I’d later realise that with CLA and Education, contributing to development becomes simplified.

Theophilus: Do you think you were not allowed to go “in the best interest of the department” because you had the best CGPA then and were a potential Best Graduating Student?

Oluwajuwonlo: Relatively. But it was a likely reason too.

Theophilus: You held many positions on campus, and still ended up emergent as your department’s Best Graduating Student. When did you make the decision to not limit yourself to academics?

Oluwajuwonlo I’ve always wanted to develop my leadership capacity. One main thing my dad told me while leaving for school was, “meet people; explore.” So, I knew networking was a necessity. I started as a course representative in 100 level. By 200 level, I joined the Sigma Club and that changed my orientation and exposure about leadership and success. I learned it’s possible to succeed as an A-student and still make prominent impacts in the microecosystems around you. I joined Building Nations Initiative where I learned in practice, community building. Politics has always been my interest; I actively participated up to the top positions.

Theophilus: Tell us more about your leadership experience. You held top positions in Sigma, and in one of University of Ibadan’s largest halls. How were the experiences, and what memories had the biggest effects on the kind of leader you now aspire to be?

Oluwajuwonlo: I served as the Chief Scribe, Sigma Club. Before then, I served as the Chairman of the Sigma Essay Competition which had Prof. Yemi Osinbajo, the Vice President of Nigeria, as the guest speaker and the presenter of the prizes for the essay. That was a huge success for me and the club. Serving as the Administrator-General of Independence Hall came unexpectedly. As a proactive leader, I rose to the occasion and turned around the soon-to-be-ugly scenario to a mighty success for the Hall. I’ve learned that going forward, transparency should be a companion and that a leader is a leader because there are followers. So, the followers are the ‘leader.’

Theophilus: How were you able to combine all these things with your academics so that the one didn’t affect the other?

Oluwajuwonlo: It was simply the grace of God. I adopted a time management strategy that allowed me to attend actively to my studies without leaving extracurriculars behind. Networking to me is part of education. I saw my academic and non-academic activities as education. When the time came for reading, I read and when it was time for politics, I engaged.

Theophilus: What would you call the biggest challenges you faced in your four academic sessions as a UI student? Was there a time when you wanted to quit it all?

Oluwajuwonlo: Quitting was never an option. I had financial difficulties at some point. It was tough, but God helped me. In 300 level, I started working as a tutor for extra income to sustain studying. I’d later get to know about freelance writing in my final year. That created a financial relief.

Theophilus: You were never overwhelmed by the number of things you did?

Oluwajuwonlo: To some extent, I was. I was overwhelmed by the long hours of meetings in Sigma Club; 8 – 10 hours of meeting, mostly overnight, influenced my reading habits and concentration in a way. I was able to find my way around it, though.

Theophilus: What was your reading style? Would you suggest that anyone adopt it?

Oluwajuwonlo: Anyone interested in a freestyle reading pattern could adopt it. If we covered ten topics in class, I’d go an extra mile to create notes for the topics. I studied with past questions and identified unclear areas before exams. A day to an exam, you’d find me in bed, sleeping. I don’t read when exams come; I do that prior to exam time.

Theophilus: You’re a high-flyer with many achievements to your name: a first-class degree, your department’s Best Graduating Student, one-time Chief Scribe of one of UI’s most prestigious clubs, erstwhile Administrator-General of one of UI’s most influential halls, amidst others. Relating this to the general perception of students of education, what do you have to say? 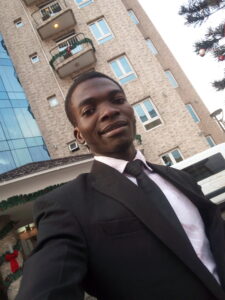 Oluwajuwonlo: I should quickly correct the general assumption that education as a course of study is for the weaklings. That’s deceptive. Education is for the best minds; those who are regarded as ‘Philosopher Kings.’ They are agents of change, nation builders, and world moulders. On this basis, I congratulate faculty of education student.

Now, let me point out that self-perception and acknowledgement are major intrinsic issues affecting education students. This is because the majority of students in the faculty never thought of picking the course nor practicing as a teacher. The result is that from their 100 level, they tend not to take their course of study seriously. This then affects their grades and performance.

From their low grades due to lack of interest in their courses, education students catalyse the bring-them-down syndrome from externals. Lecturers and students from other faculties begin to see them as the lowly. That’s bad.

Aside from their potential abilities to compete as educated individuals, students at the faculty of education, especially those from the Department of Arts and Social Sciences and Science and Technology Education, have double-honour degrees. That’s a huge advantage over others. But many don’t realise this. A low level of orientation is also a problem.

When I was accepted into the Nigeria Higher Education Foundation Scholarship program, many people doubted it. People I encouraged to apply didn’t even bother to open the application. It’s a matter of self-belief and opening up minds to unlimited opportunities.

Theophilus: This is a beautiful summation! For whatever reasons, you’ve left out your experience as a Nigerian Higher Education Foundation Scholar from your story. Tell us how it was like being selected as one of the 2019 Scholars. You must have been the first student of education to get selected.

Oluwajuwonlo: Yes. I was the first Education and Communication student to make it to the prestigious program. I applied in 300 level for the NHEF essay competition. Along the line of submission of my essay, I realised the program includes an in-residence scholars’ orientation and internship. I then applied. I didn’t make it. It’s a program designed strictly for penultimate students but that didn’t quash my can-do spirit. So, in my final year, I reviewed my essays and applied again. I made it. The experience was superb and the networking remains fantastic till now.

Theophilus: What was the most valuable contribution the NHEF Scholarship made to your life?

Oluwajuwonlo: The orientation programme was an eye-opener. It’s simply put, “You can do anything as long as you can dream it.”

Theophilus: You are a serial award winner when it comes to essays. Can you remember some essays you won and some shortlists you made?

Theophilus: If you could do anything differently, what would that be?

Oluwajuwonlo: It’d be to make a wider network of people. Probably join the Union of Campus Journalists. I’d always wanted to, but politics takes the highest love.

Theophilus: And the only politics you can get involved in as a journalist is the UCJ politics and contesting for UCJ positions.

Oluwajuwonlo: Lol, you see why I didn’t join.

Theophilus: What advice do you have for Katangites in particular and UItes in general?

Oluwajuwonlo: There’s a place for process in every success. That process involves sacrificing to earn the top badge. It doesn’t always come easily. You have to be intentional, desirous and actively pursuing it. Anyone that wishes to be great should be proactive about it, keep a goal-getting company of friends and put God first in every aspect.

Oluwajuwonlo: Committing things into the hands of God while looking to tap into educational opportunities which are the bedrock of attainment to contribute positively to society.

Theophilus: Thanks so much for having this interview with us.

Oluwajuwonlo: Thanks for having me. I appreciate your good work. God’s blessings always.